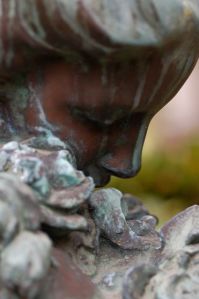 I’ve been driving across a lot of vast, open spaces in the past few days….the beginning of plains country around Amarillo and the high desert and desert of New Mexico stretching all the way to mountain. Dad has been on my mind. He was about the same age I am now when he died. And I never really knew him. If he could have waited on me to grow up more, to be able to sit in the discomfort that was always between us, we might have been able to have some real conversation, or if not that, that sincere quiet that can reside between two people who love one another. My Dad was a child of the Great Depression, and that marked him all his life. He left home early; by 16 he was off to college and then to the Merchant Marine Academy. He was forthright and opinionated. He drank too much and said things I would imagine he regretted later. It was the saying of those things that put distance between us. They hurt, and by the time I was 8 I moved some place far back inside myself and never came close to him again. But some of my siblings managed better. My late sister Carmen said she always saw him as a hurt, little boy. My brother loved and admired him and has nothing but that to express when my Dad’s name comes up

to this day. But me….I missed an opportunity to know him. I couldn’t get past the fear of hurt. So I’m thinking of him as I drive past vast, open spaces because there was a vast, open space between us, and now I’d like it closed.