Alpine: July I’m on the wrong side of the tracks, where the hotel and saloons were when Big Bend’s cattle were herded to railroad tracks where trains took them north. The hotel has gone to ruin, two walls left. The saloons have moved across the tracks to the gringo side of town and are called bars. Here houses are weatherbeaten. Blocks have empty spaces where mesquite and desert petunias grow and sheds and barns fall in. We face a hill. Sounds travel. The train. Music.

It’s late twilight. I hear singing. I follow the sound. Valensuela Reunion 2014 a handmade sign taped to metal carport says, and beyond is the band. Mariachi, the accordion, the guitar, the fiddle, and the nasal, heartfelt singing. Someone is grilling. A woman sits in one of a row of empty folding chairs listening. The man grilling sees me, waves me forward. No. The woman turns and waves for me to come in, also.

Why not? I think. I go in and sit down beside Tina, who explains the band is practicing for the party tomorrow night. You need to come, she tells me. The man grilling shakes my hand and tells me his name is Jaime. Come to our party tomorrow, he says. I sit in the long summer twilight listening to Mexican love songs, their wistfulness rising to the hill. It’s neither lonely nor strange to be sitting in this back yard with people I don’t know. It’s Alpine. 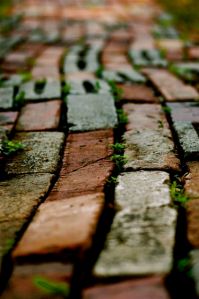 I cried as I drove out of Alpine, Texas, nestled in the high desert of the Glass and Davis Mountains. I knew I would. Now I lay me down to sleep, I pray the Lord my soul to keep, If I die before I wake, feed Jake…he’s a good old dog played on the radio as vast vistas, burned by wildfires, spread out on either side of me. I was driving back to real life….what’s happening with my book, will the rosebush live, what are they doing about the debt crisis….

I came into Alpine on my broom…..part Nanny Mcphee, part tattered good fairy whose tutu is too tight, part secret wild-eyed, owl-faced shaman woman with sharp talons. There were 17 small eggs in the nest that was my class this time. All had cracked open their shells. A few nestlings were out, peeping, ready for food, ready to fly. But as always, too many had crawled back in their broken shells in discouragement, and some were already trying to peck themselves to death. I say, in the come-on of the class, that it’s about novel basics, some craft and technique you need to know. But I throw in one line, about wounded or stalled writers…that it will good for them, too. I know about being a wounded and stalled writer and am on a rescue mission.

My real work is to make them feel safe. My real work is to get them to spread their wings. My real work is to get them to believe in themselves again. I start by sitting on the nest and just warming things up. They break into small groups and start to know one another in an easy way that grows really large as they share, only with each other, the fast bits of writing they’re doing. I assign the writing in fast bits because they don’t have time to argue themselves out of it, and they’re always too polite to refuse to write at all. I eye-dropper facts and technique into their mouths just so they won’t leave and the really tough ones will shut up for awhile.

By midweek, some are flying around the room. I send them on a walkabout, out of class, to stretch and dream and play with creativity and writing. They’re beginning to share with the whole class. There is a lot of laughter. There is awed respect. There is no denying their gifts. They are hearing them. By Thursday, some of them are willing to read at the student open mic. Those who aren’t reading are there to cheer classmates on. Pin feathers are on all of them. Some of them are chirping, preening, clearly too confined by the classroom. They’re ready to be out soaring wind currents in their own skies.

Friday, it’s over. I stand before them, tugging my tutu, some of my owl feathers molting, and we do our last bit of business, which is to say goodbye to one another and to be reminded that we are writers whether we get published or not and to honor that need to write in each of us. One by one, I watch them fly away. My heart always hurts. While they’ve been doing character sketches from all that is around them, I’ve been doing character sketches on them, and I love them, each and every one of them, their protests and fussiness and impertinent questions….but mostly their trust. I love what they created during

So I pack away my broom and medicine balls and moth-eaten tutu to drive home, listening to laying me down to sleep and feeding Jake. They must remember to feed themselves, I think.  But they’ve learned that. Time to move on. I’ve got a rosebush to water.

Tagged Alpine, being a writer, learning to write, novels, Texas, West Texas, what you get from a writing retreat, Writers' League of Texas, writing retreats

The neighborhood poet has pulled up stakes and moved to Alpine. All week, as I’ve driven past a certain intersection where I can see his house, I’ve watched his packing and bustling. He’s hardly  just the neighborhood poet; he was the poet laureate of Texas in 2008, and he’s more than acclaimed. But for me he’s one of the characters in my Houston world: big, burly, soft Texas accent, friendly as a puppy, wonderful old-world-Texas manners, wildly in love with words. He’s likely to arrive at one of his readings in shorts and an old T-shirt and sandals, his heft punctuating inbreaths, a big turquoise ring capturing one’s eye and the spirit of his words. His frame–large and laughing–– hides the subtle sinewy strength that can reside in his poetry.

We talked a little bit about the muse yesterday. I’m a man of ritual, he said, fretting about the leaving of his writing place, a small studio at the back of his house. I’m taking a chance moving away like this. She may desert me. I said I doubted that. I said I thought the wide open true Texas spaces of Alpine would likely deepen his work. What do you want to bet, sitting there, staring at the mountain, the landscape that has always informed my work, that I start to write about Houston, he said. We both laughed. That would be a good thing, I answered. Landscape makes solid bones in his poetry and can be quite startlingly metaphoric. We really never ran around together as neighbors, but our paths would cross at local spots. Now they won’t. When I see his house at that certain intersection, he won’t be in it. My psychic landscape already misses his place in it. And soon, this being Houston, the house, being old, will be razed, and a stunning, huge townhouse will sit on the spot. Houston does not celebrate landscape or anything old. It’s always moving, expanding, changing its face. Bittersweet, my neighborhood poet said, that’s what this move is, bittersweet.

Yes, I thought. When we’re young, moves are only sweet. It takes time to leaven them with some bitter, the knowledge that with every move, not only do we leave behind sometimes precious, irreplaceable things, we take ourselves, all our flaws and longings, strapped to our backs like invisible weights––or wings––

wherever we go. What gold he’s made of his wings and weights…..And so, off he’s gone to where hawks/slingshot-flung,/scream in dazzling/Texas sun.

When you have a moment, hear him read here.

A ladybug update: Festival was held on Thursday. It was a success. There are some 1,000 ladybugs out there bearing blessings and our laughter. Hope one lands near you.

I’ve been in Alpine, at the top of an area of Texas called the Big Bend, teaching at a summer writing academy. It’s an interesting area, desert and mountain and big open spaces with

views that make your heart open and your breath catch. Apaches, Pancho Villa, Buffalo Soldiers, railroads, cattle, oil, Mexico once its owner and everywhere its influence.

Two people have made the writer in me sit and take notice. One was an 85-year-old rancher who walked stiffly and slowly––I’ve been broken up so many times I finally had to get down from my horse, he told me later––into a coffee shop and then talked with me for a while. Pressed chinos, polished boots, straw cowboy hat, crisp shirt, he was authentic in a way I seldom see.

He came to the Big Bend at fifteen to survive the Depression and cowboyed on every ranch in the area, eventually owning one himself and becoming an influence. His card said simply, cattle and investments. There’s a local memoir about him called The Last Campfire. And he’s written a memoir himself: Shades of the West.

Some of the things he said: Life has been good to me. Children step on your toes when they’re small and on your heart when they’re grown. I used to have 18 cowboys and 100 horses. Now you can’t find 18 cowboys between here and El Paso. His dignity was immense, and later I realized that I had gotten to meet what was likely one of the last real cowboys. His name is Ted Gray.

The second person to raise the ghost of my writer was a waitress in Marfa. She reminded me of an actress called Lois Smith who was in East of Eden with James Dean. Smith gave off a vulnerability that was haunting in that movie. The waitress was slim, quiet, young, a tautness to her. I asked her if she was from the area, and she said no, she was from Alpine. Alpine is about 24 miles from Marfa. I assumed she was a student at the university in Alpine and had to work. The area’s magnificence has its grimness, too, a lack of easy ways to make a living. So, I asked if she was a student at the university, thinking to myself, she couldn’t be more than a freshman. No, she said, with a swallow and quick glance at me. I’m just trying to raise a family. The words hit me hard, and I’ve been thinking about her since. I don’t know her name.